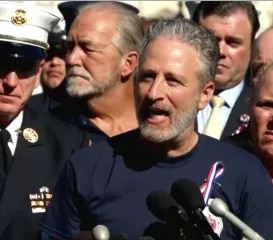 Comedian Jon Stewart turned serious this week when he joined a group of almost 200 police, fire and rescue workers in Washington D.C., lobbying Congress to renew the James Zadroga 9/11 Health and Compensation Act that will expire soon.

The Health and Compensation Act provides benefits to first responders and residents sickened by the toxic air and smoldering debris following the historic terrorist attack on the World Trade Center in New York City 14 years ago.

Of particular long-term concern is a belief by medical professionals that the incidence of cancers, such as malignant pleural mesothelioma caused by inhalation of asbestos fibers, will skyrocket in the future.

Stewart, former host of “The Daily Show,” has been a longtime, vocal supporter of first responders and their future health. He played an active role in lobbying when Congress originally passed the Zadroga Act in 2010.

Stewart’s appearance Wednesday on Capitol Hill brought considerable attention to the issue and opened doors that might otherwise have been closed.

“Jon’s presence made all the difference in the world for us this week,” John Feal, president of theFealGood Foundation, a prominent first-responders advocacy group, told Asbestos.com. “To thank him, I said I would mow his lawn for the next 20 years. But this wasn’t his first rodeo. He’s been with us for a long time.”

Feal introduced Stewart on Wednesday at a rally of supporters outside the Capitol. Feal was alongside Stewart when they met with U.S. Sens. Mike Lee of Utah and Mitch McConnell of Kentucky. They also met with staffers from the office of Sen. Lindsey Graham of South Carolina.

Graham already had left for California, where he was part of the Republican Party presidential debates Wednesday. Stewart also attended the Senate democratic caucus lunch in the Capitol.

“I’m confident that if a bill had been on the floor this week, it would have passed. The support is there,” said Feal, who doesn’t expect passage until late October or November.

More than 150 lawmakers already have signed to co-sponsor the 9/11 Health and Compensation Reauthorization Act (HR, 1786, S. 928), which was introduced in spring. It would include continued economic compensation for those who were harmed, as well as lifetime medical treatment and monitoring.

70,000 People Being Treated or Monitored

The health program currently has more than 70,000 patients receiving care or monitoring. It expires in October, although there is funding to continue into 2016. The Compensation Fund, which includes anyone diagnosed with a disease linked to 9/11, expires October 2016.

Stewart and the other lobbyists are asking for passage of the Reauthorization Act, which includes a “permanent extension” that would provide indefinite funding for health care and future compensation claims.

The proposal will be debated and refined in the coming weeks before going to Congress for a vote. The biggest issue likely will involve end points and limits, which the original bill included.

Skeptics believe an indefinite extension leaves too much room for fraud and abuse. And with the federal government almost $20 trillion in debt, Congress may agree.

According to the Victim Compensation Fund’s latest report, all 50 states have at least a few individuals receiving compensation benefits. There are more than 15,000 claims for compensation already approved.

More than 2,600 people died in the original attack when radical Islamic terrorists hijacked two commercial jets and crashed them into the Twin Towers, causing the ensuing chaos and the toxic cloud of carcinogenic materials that hovered over Lower Manhattan for weeks.

An estimated 400 tons of asbestos were used in building the Twin Towers, exposing thousands of first responders and residents to potentially serious health issues throughout the cleanup period.

Stewart told those gathered at the rally in Washington that he was amazed a lobbying effort was even needed to secure future funding.

“I’m embarrassed that you, after serving so selflessly, with such heroism, have to come down here and convince people to do what is right for the illnesses and difficulties that you have suffered,” Stewart told the crowd. “I want to apologize to all the men and women, the first responders.”

Feal, a U.S. Army veteran and demolition supervisor, said he and several others advocates will be returning to Washington D.C. in October to continue their lobbying efforts. He is hoping Stewart returns alongside them.

“He has an open invitation,” Feal said. “We could use him.”

Call Now
We use cookies to ensure that we give you the best experience on our website. If you continue to use this site we will assume that you are happy with it.OkPrivacy policy